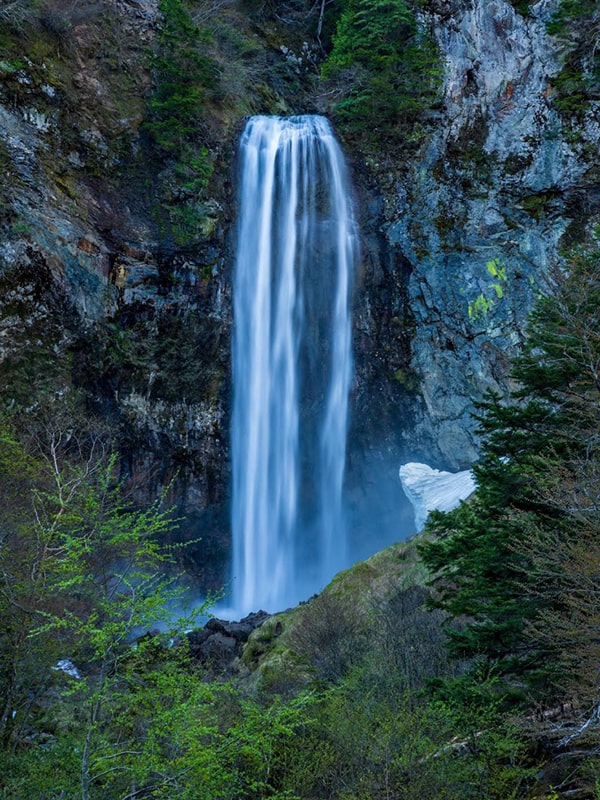 Heading south from the Hirayu Bus Terminal and walking for about ten minutes along a trail within a birch forest, you will see the magnificent shape of the Hirayu Grand Waterfall, which is one of three major falls in the Hida region. With a height of 210 feet and width of 20 feet (64 x 6 meters), the view of the waterfall is truly spectacular. Its dynamic splashing generates negative ions in the surrounding air, a highly beneficial effect. Along the sides of the trail, you will find sedimentary rocks exposed that were deposited during the Triassic and Jurassic eras on an ancient seabed in a geological zone called the Mino Belt. The rocks evoke a sense of romanticism for ancient times and a sense of wonder for the greatness of nature.

The area surrounding the waterfall is known for its beauty, with fresh green verdure in spring and incredible foliage during autumn. In winter, the waterfall freezes and transforms into an enormous icicle. The Frozen Hirayu Grand Waterfall Festival is held from February 15-25 every year, when the waterfall is illuminated at night. Also held is the Nukutomari (“warm yourself”) Bazaar, where you can enjoy watching fireworks, folk entertainment, drinking amazake (sweet extremely low or alcohol-free sake), and more.

There is a legend associating a white monkey with the Hirayu Grand Waterfall. About 450 years ago, a troop of soldiers led by Yamagata Masakage, a vassal of warlord Takeda Shingen, invaded the Hida region. By the time the soldiers reached this waterfall, they were too exhausted to advance any further. Suddenly, an old white monkey appeared from the mouth of the fall. The monkey guided the soldiers to a hot spring, allowing them to recuperate from fatigue. This event was considered to be the beginning of Hirayu Onsen, and the waterfall was named after the hot spring.

Hirayu Grand Waterfall is a scenic spot designated as one of 50 Remarkable Waters in Gifu Prefecture, and Japan’s 100 Renowned Waterfalls.

Contact: 0578-89-2614 (Okuhida Onsengo Tourism Association)
Free parking is available for 50 cars.
Access: Approximately 25-minute walk from the Hirayu Bus Terminal
It is also possible to park at Takimi Tenbo Hiroba directly in front of the waterfall (20 cars).
*Large sightseeing buses can enter the parking area only to permit the boarding of passengers.