Guardian deity of the Hirayu forest, designated as one of Japan's 100 giant trees 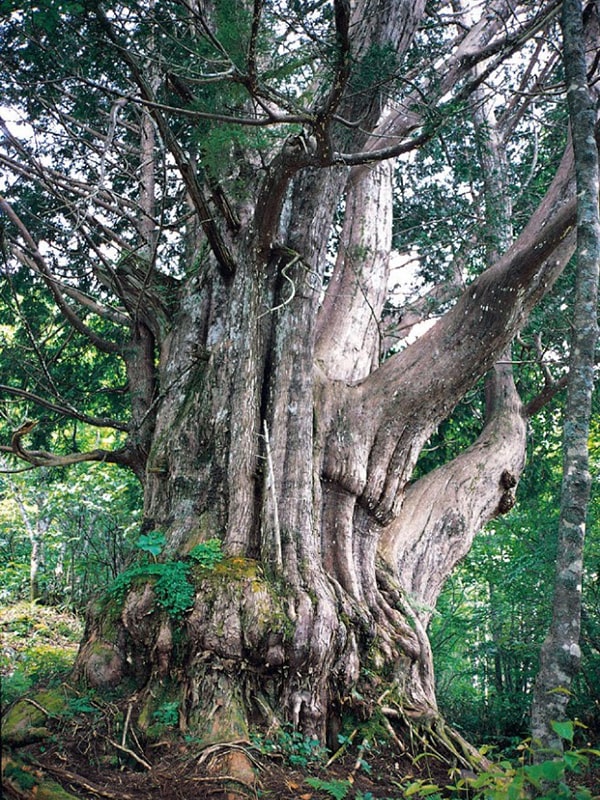 Nezuko and kurobe are both used as names for Japanese arborvitae thuja, a conifer in the cypress family, also written as kurobi, or “black cypress,” using Chinese characters. It is one of the Five Sacred Trees of Kiso that include the four cypress varieties of hinoki, sawara, asunaro and kurobe, with the fifth as the uniquely Japanese umbrella pine, kōyamaki. During the Edo period (1603-1868), the Owari Fief protected nezuko trees by prohibiting anyone from cutting one down. Nezuko foliage is similar to that of hinoki and sawara cypress, although somewhat thicker and blackish in color on the underside. It has also virtually unseen pores called stomatal bands for exchanging oxygen and moisture with the atmosphere. Nezuko trees generally grow to be 80-100 feet tall (25–30 meters).

Hirayu Ônezuko is 75 feet tall (23 meters) with trunk girth circumference of 25 feet (7.6 meters) and is estimated to be nearly one thousand years old. It is exceedingly unusual for trees to grow so large in a high altitude environment of approximately 5,000 feet (1,500 meters). Hirayu Onezuko was designated by the Forestry Agency as one of Japan’s 100 giant trees, which is a representative collection of Japan’s greatest trees. With an abundance of thick branches and a gnarled trunk, this gigantic tree has been likened to the guardian deity of the forest.

In the Taisho period (1912-1926), the educational sociologist Shinohara Buzen who had moved to Hirayu stressed the importance of nature. Inheriting his teachings, the local people named the tree “Hirayu Ônezuko” as one of the precious assets belonging to Hirayu, and have been carefully preserving it ever since.

There are wooden observation decks built around the base of the tree trunk, and wooden plank paths for access.

Contact: 050-3160-6085 (Hida Forest Office)
Access: Approximately 30-minute walk from the Hirayu Campground, and from the No. 2 Car Park of the Hirayu Spa Snow Area.